February 12, 2017
Art
noun - the quality, production, expression, or realm, according to aesthetic principles, of what is beautiful, appealing, or of more than ordinary significance. 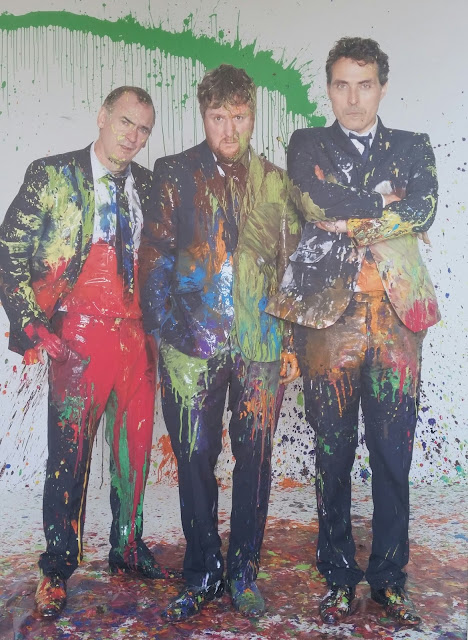 A friend asked me if I fancied a weekend in London (she knew full well I would say yes) and she told me to book my usual hotel for the pair of us. I thought little of why she wanted to stay near Waterloo, but I was soon to find out. We were off to watch Art at The Old Vic, with RUFUS SEWELL in it!

I loved watching Rufus Sewell in Zen, and more recently as Lord M in ITV's Victoria. For the first time ever, I wanted a historically based drama to not pay heed to history; I wanted Lord M and Victoria's relationship to continue long after Albert was on the scene!!

I was thrilled, I knew very little about the play, but quite frankly Rufus could just stand on stage saying nothing and I'd be happy to watch him. He's one of those actors that can say a thousand words without uttering one syllable.

It’s not really a painting…is it?

Who in their right mind would invest in “a canvas about five foot by four: white? The background is white and, if you screw up your eyes, you can make out some fine white diagonal lines.”
Serge did.  His friend Marc is not happy about it. Not happy at all. Unlike Serge who is thrilled with his purchase. It makes him happy. It’s his money (a hundred thousand euros to be exact) and it leaves him with a smile as long as the Nile on his face. Unlike Marc. He REALLY is not happy about this investment.

Art appears to be an easy storyline to follow, someone has bought what he considers to be art. He finds the painting beautiful, but beauty is in the eye of the beholder, and what one person loves can be hated by another. The play centres on this painting and the thoughts of Serge and his two friends, but as you get absorbed into their conversations, you realise that this story is about a lot more than just a painting.

The play takes place on a simple set. There is a stark, neutrally painted room, with a coffee table and three chairs. It highlights the relationship of three male friends as we move between each of their houses. As the successive scenes unfold; only a painting on a far wall changes to reflect their different personalities.

There are three friends, Marc (Paul Ritter) Serge (Rufus Sewell) and Yvan (Tim Key) The question is, why is Marc so upset?  Serge has spent his own hard earned cash on a painting which makes him happy.

Marc: You paid a hundred thousand euros for this shit?

Serge: By whose standards is it shit? If you call something shit, you need to have some criterion to judge it by.

He doesn’t like the painting. Fine… But there was no warmth in the way he reacted. No attempt. No warmth when he dismissed it out of hand. Just that vile, pretentious laugh. A real know-all laugh. I hated that laugh. 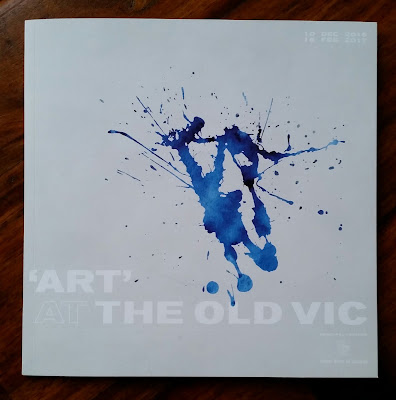 Yvan’s flat.  He has left the career he knew behind him to start again as a sales rep for a stationery business…and he’s about to get married. Marc tells Yvan all about the painting, he wants Yvan to agree with him, but Yvan is rather relaxed about the whole affair. If the painting makes Serge happy and he’s not harming anyone, then surely there is no problem.

But there is a problem, as the scenes play out we realise that this is a play about how friendships change, how people grow apart, their tastes shift, they move on. Where once upon a time people had control and influence over their friends, their friends may have now gained a new found confidence to be themselves. Those with influence and power don’t like this change in status, and this play shows the fear and disintegration of a person who has been used to getting his own way for too long. Rather than Marc admitting he doesn’t understand modern art to Serge, and asking questions to learn and understand it, he just says it’s shit. He’s not happy to discuss the matter, because in this instance Serge knows more about the subject than he does. Serge doesn’t need Marc in this instance and Marc doesn’t like this sudden loss of control. Small minor irritants from throughout the years have suddenly built into a crescendo, every word that is uttered suddenly grates on each other’s nerves.

In the midst of this feud is Yvan. He is about to be married and suddenly he's having a meltdown about the politics of a family wedding. A quarrel between his two friends is the last thing he needs, nor is this the time to suddenly find out your friends feelings on your future bride “if you’re already letting yourself be fucked about by her, you’re in for a hideous future.” As more and more grievances about each other’s imperfect lifestyles are aired, we begin to reach the climax of the play.

The men sit around a table drinking and slowly, one by one eating from a bowl of olives. It is time for the focus to return to the painting, the painting that enabled each party to express their hidden thoughts and feelings, the painting which nearly destroyed three friendships.

A final act of sabotage seemingly shows that a friendship means more than a painting…but what is this clearing of the air and trial period of friendship based on? Another series of lies to save face…and so the friendships continue…but for how long?

Meeting The Man Himself! 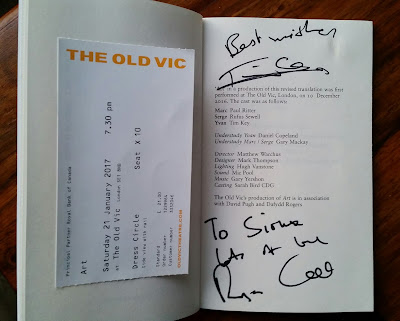 After the play we were “ushered” out down a back stairway, and we were suddenly on the street right by the stage door. I looked at my friend, and we said why not? We’ll either meet Rufus or we won’t so we might as well give it a go. As we stood patiently waiting a chap scurried past us…my slow brain suddenly thought “That’s Tim Key (Yvan)” Now the question was whether I should run after him or not. Of course I did, I asked him if it would be ok to get his autograph, and bless him he said yes it was fine, he just assumed I only wanted Rufus’ autograph! I had a nice chat with him about his performance (he does this wonderful long soliloquy) and then I scurried back to my place at the stage door.

Rufus came out a few moments later and chatted with the ladies in front of me, then he turned to me. What a lovely, lovely man. We had a really nice chat (and poked a bit of tongue in cheek fun at the expense of poor Tom Burke – Rufus had worked with Tom in “The Brunchers”) It’s often said you should never meet your heroes, but in my case I’m glad I’ve ignored that advice, meeting Tom and Rufus has worked out well. Both have been as nice as I hoped for! Such an amazing end to a thoroughly enjoyable day.