As New Year’s go, 2017 has been pretty good so far.  I read some of the air of despondency on Twitter (last year we had seen Tom in War in Peace, then there were the radio plays, and of course the excitement of tickets in our sweaty paws to see him on stage for the first time...but we've got nothing at the moment...) but I seem to be too busy to worry about Burke Blues! I'm even having the odd moments when I'm wondering if I'm a real fan of Tom's at all! Of course I can't wait to see him bring Cormoran Strike to life (I could easily picture him in the role when I read the novels and I did become rather excited about what the end result would be like) but we won't see the series until the end of this year...so what am I supposed to do until then?

Tom/Athos enabled me to find some like-minded people who are out for fun, adventure and a bit of theatre, and so rather than sit waiting for Mr B's next move, 2017 has already started with a bang, and it seems like there's been no time to write about it all!

So, what HAS been going on in the first six weeks of the year? Here's a flavour of a few bits... 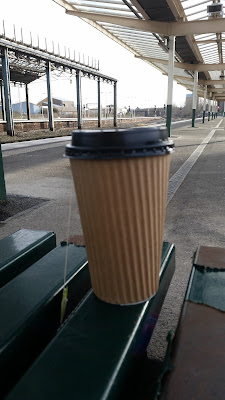 I’ve started the year with two trips to London! I really should have my own gold plated seat on the Chester to Euston train by now. (Virgin trains take note of that.) I watched Wild Honey at The Hampstead Theatre, London and Love at the Dorfman Theatre (at The National Theatre London). This was followed by another trip down for a girly weekend, in which I went to see Art at the Old Vic, London where I met Rufus Sewell - another hero of mine! (There’s a separate post about that trip!)

Love at The Dorfman was so entrancing that I also decided to take a trip down to Birmingham to watch it there too.  I wanted to see what sort of reaction it would evoke in another city which also has substantial homelessness problems; although to be honest, I really didn’t enjoy the prospect of tearing down the M6 after work to see it. I use the term ‘tear’ loosely as the M6 to Birmingham resembles a car park with lots of irate drivers on it. (For my thoughts on Love – see my separate post.)

In amongst this I tried to finish off my reading challenge = success (finished it all with one day in hand!) and I also felt inspired to try sketching Cormoran Strike. (I can’t believe how hard I found it…Athos became easier because I could see the character not the actor, Cormoran is harder. I keep trying to stop making it look like Tom, which is actually rather hard, especially when you haven’t seen the series; just a rough photograph to copy!)

Start of a new month…must be time to hop onto a train for London then! Friday I zipped down to meet a friend and watch a Howard Barker play. I’ve read a few of his plays (his work introduced to me because Tom had acted in a couple of Barker plays) but I had never seen them performed. 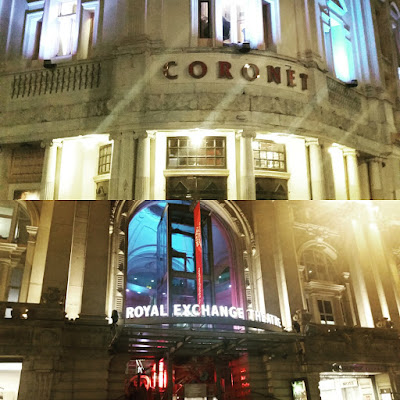 Reading them can be hard, they are meant to be seen, or at least heard. The words on the page are given life by the actors, and so I was really excited to see In The Depths of Dead Love at The Coronet Printroom London. What an amazing place that was! Next day a trip up to Manchester was planned to see The House of Bernarda Alba, however, just after breakfast my phone rang. It was my nextdoor neighbour. “Hi, hope you’re having a good time, I think Gerrard (my cat) might need to go to the vet. He’s not weeing properly and he's licking his bits. Which vet do you use?”

Oh my God. I know this was supposed to be a weekend of drama, but really? He chose the weekend neither of his owners are at home to have a flare up of his ‘usual’ problem! Well that’s typical. What do I do? I can get off at Crewe and get another train to Chester and take him to the vet myself (he’s got an appointment for 4:00) or, or, well what else do I do? Well according to my friend (she really is the best) “Go to Manchester, I’ll see what the vet says, then you can take it from there.” So I did. I got off at Manchester and she rang me later. “He’s got tablets…lot’s of them.  And errrmmm, did you know he has a heart murmur?” Yes I admit, p’raps I should have mentioned that at some point. So with relief that he was going to be ok, I went to watch The House of Bernarda Alba. It was only when I was reading the programme that I realised it was a “disabled” theatre group that was putting on the performance. I wasn’t sure how it would work, but I went in with an open mind and came out completely blown away. The play was amazing.

My friend and I then played “escape from Manchester.” It’s an interesting game, even with the help of SatNav woman. We saw every side of Manchester before finding the motorway and escaping. I never drive into Manchester, now I know why. It was like being in a Murukami or David Mitchell novel. You think you are in reality…but are you? And if you’re not in the real world, how do you leave this strange land behind to get back to where you were?


The Campaign for Real Cats 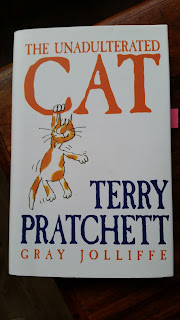 Sunday I was supposed to accompany my friend to a wildlife centre and polish up on our photography skills. I was really looking forward to it, but Gerrard had to take number one spot in my decisions, and he was still at that stage milking all the attention he could get.  I got an amusing book for Christmas called “The Unadulterated Cat” by Terry Pratchett. Never mind the Campaign for Real Ale, this is the Campaign for Real Cats. 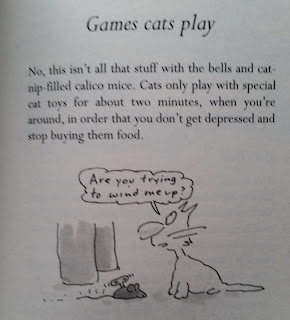 In the chapter Types of Cat, at No 5 Sort of Tabby Cats with a Bit of Ginger, But sometimes In the Right Light You Could Swear There’s a Hint of Siamese There  Your basic Real cat. Backbone of the country’s cat population.

Gerrard is most definitely a real cat. He matches that description, plus he refuses to wear a flea collar,  he never chases anything you throw for him to play with, and when your back is turned he will eat anything left on the side if he thinks he can get away with it. Yes, he eats quiche, gravy, butter, Marmite… anything he can wave his slobbery tongue over. Yes he’s a Real cat, he’s not going to stick to the vet’s nonsense “urinary health” diet. No no no. He will supplement his very expensive diet with anything he can find, then get himself in a pickle which necessitates his lovely neighbour whisking him off to the emergency weekend vet for £100’s worth of treatment and the vet ringing me on a Sunday morning to go through what he had previously said to my very nice friend and neighbour!

Anyway, after a week Gerrard seems to be on the mend which is good. I can go back to concentrating on feeling sorry for myself because my chest hurts from all the coughing I’ve been doing recently. Blummin winter colds.

So what’s next on my busy schedule? Well there’s David Hare’s Skylight to see at the theatre in Mold. My nephew turns 21 (impossible I refuse to believe that), I’m heading up to Yorkshire for a 40th birthday, and there's a promise to go and watch 50 Shades Darker…well I drag my friends to see all things Burke…about time they dragged me to see all things Dornan!