March 17, 2017
This weekend my travels to London were taking me on an unexpected journey. I had received an invitation to attend a read through of Box Clever Theatre’s latest play. I was intrigued. I wasn’t sure what to expect but I knew it would be enlightening and not an experience to miss. Another opportunity I realised I now had, was that I could go and see Anna Calder-Marshall in Lost Without Words at The National Theatre. She had mentioned it when I saw her in Birmingham after a production of the play Love. Lost Without Words is only an hour long and so it didn’t warrant the expense of a special trip to London, but if I was already there…

I got up bright and early on Sunday morning. I had had my hair styled a few days earlier, but it needed a wash, and I thought “I’m going to blow-dry it like my hairdresser does.” So I sectioned my hair off and started curling my hair up…and then disaster struck. I telephoned my neighbour. No reply. I texted my neighbour “ Please don’t laugh…I’ve got my hairbrush stuck in my hair. Can you rescue me?” “OMG!!! That’s hilarious!!!Of course hun.”

Hilarious???? I trotted round to next door with hairbrush stuck in hair and endured 20 minutes of my saviour slowly untangling my unruly mane with the aid of fabric conditioner. “I think” she said “you might want to wash your hair again hun.” Not only did I have to suffer the indignity of being covered in fabric softener, but no-one in her household looked at all surprised that their next door neighbour had suddenly appeared with a brush spot-welded to her scalp.

Hair washed for a second time that morning, and allowed to dry naturally (a ball of frizz then) I drove to the station hoping that the day would get better. I parked and had most of a train carriage to myself…so the day was starting to look up. To round it off I met my two wonderful friends and we headed off to our usual hotel for a much longed for catch up session and dinner at The Swan (by The Globe.)

A bright sunny Monday morning dawned, not the type of day to encounter Gothic horror, but Box Clever was about to take me on an absorbing journey into a dark and atmospheric voyage of discovery. I read Mary Shelley’s Frankenstein some 20 years ago as part of my English Literature degree. Whilst I couldn’t remember the entire plot, I did recall that it was a long book containing a multitude of characters.

I was given a warm welcome by Michael Wicherek, the Artistic Director of Box Clever, who gave a brief explanation about what to expect during the morning. Box Clever had been working with several schools near Manchester, Lincolnshire and Kent to turn Frankenstein from the text they knew, into a 60 minute play. The play had to be written for only three actors, yet still remain true to the original story. They discussed what the play meant to them, some questioning what a book published in 1818 could offer them in this modern age.  It was then reiterated that this was a read-through, the actors were not to do too much acting; we were to concentrate on the play. What worked, what didn’t, what we liked, what we didn’t.

Three actors took to the floor, two male, who were to play Frankenstein and his creation/monster and one female who would play the writer of the story. I sat transfixed. The entire tale was told in just over an hour. We bore witness to Frankenstein’s obsession with trying to create life. We saw the result of his work and the destruction of people in the process. We saw a creature, rejected at birth, desperate for love and affection yet receiving indifference and hostility. All of this was woven around the writer, whose job it was to pull the tale together, to give it sense and meaning.

All good Gothic tales need a rumble of thunder....

The writer sets a scene of classic Gothic horror, the sound of the rain has to be just right. There has to be thunder, and there has to be a reason we find ourselves where we do. The best place to do that is to go back to the start, to a young Frankenstein, back to when he first saw lightening and wondered about its power and potential. Once his creator is born, Frankenstein bears witness to what he has done, and the writer questions his actions. Why did he do what he did? What has his obsession achieved? The ultimate question then has to be asked, who is the real monster? The creature, or the creator? This question is put directly at the audience. This is not a play where you sit back and let your mind wander, this is a play designed to engage you, make you question the text, question the characters and what motivates people in general. Do people ever think of the consequences of their actions and the pain they can cause to others?

Afterwards there was an opportunity to discuss the play in an open forum, and it was heartening to see some of the students who had come down to watch the play. They engaged with it and opened up the discussion as to whether the writer should be played by a woman. Of course the original writer, Mary Shelley, was a woman, and so an interesting debate ensued. We then withdrew for tea and coffee and an opportunity to chat with Michael, the actors and some of the other trustees/friends of Box Clever about our views about what we had just seen. I really enjoyed the light and shade of the piece. It started on a light and jovial note and plunged headlong into the darkness of the obsessive nature of Frankenstein. We were then let up for air before being horrified by the effect that people’s attitudes had on the creature. It was difficult and emotive viewing watching this creature that was desperate for love, learning, like a child learns, that society has cast him aside. But of course the question remains, is it nature or nurture that has made him this way? Was it society that made him a killer, or was he always destined to be a killer? Great conversations were had by all parties and it really made me appreciate the work that goes into taking a text and turning it into live theatre.

This was a really emotional and powerful piece of writing, and all parties should be proud of their work. I cannot wait to see what a director will do with the piece, there is certainly some great material there for him to work with, and for me, autumn cannot come quickly enough for me to see how the final play turns out.

Frankenstein had left me lost for words, but now I was about to see another completely different side of theatre, an hour of improvisation. 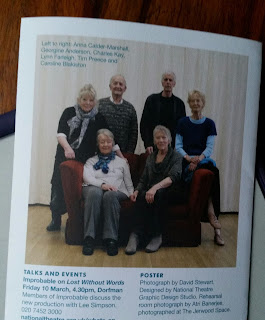 When I was younger I loved watching Whose Line Is It Anyway? I enjoyed watching comedians think on their feet, some being more successful than others! Tonight, the National Theatre placed five actors on stage for an hour, gave them a keyboardist, a lighting technician, a sound technician, and two directors. What they weren’t given was a script!

It was an hour where anything could, and would happen. Five great stalwarts of stage and screen, all in their 70’s and 80s, took to the stage; Anna Calder-Marshall, Georgine Anderson, Lynn Farleigh, Tim Preece and Caroline Blakiston. The Director said the theme was "lost" and Anna Calder-Marshall took centre stage and showed her wicked side by turning a tale of two old friends bumping into each other, into a story of remembering how they would play in the woods as children. Then it transpired that Anna was really a witch, turning her unsuspecting friend into a frog…and making her hop across the stage. It was like watching a live episode of Inside No 9!

Georgine and Caroline then took to the stage as mother and daughter, mother deciding she was going to take her daughters new car for a spin. It was great watching the director pop up and tell them to just be a passenger, don’t do anything, it was giving a little glimpse into the secret world of theatre, just as the read through at Box Clever had done earlier in the day.

It has to be said, that whilst all of the actors played their parts perfectly, Anna stole the show. In another “round” the actors were told they were not allowed to say the letter “S”. If they did, the forfeit was to act in pain. Watching Anna and Lynn desperately try not to say the letter “S” was edge of the seat theatre. You could feel the audience willing them through the sketch, and when Anna delivered a fantastic speech and was nearly at the end before saying the word “saw” you could hear the groans of the audience as they showed both their appreciation and disappointment that she had slipped up; watching her writhe in pain added to the hilarity of the piece though.

We then met the Gracious family…a card plucked at random gave the whole ensemble a chance to work together, all of them having to act graciously throughout. It was pure genius, even the directors could be seen laughing at the ludicrousness of it all. But the night wasn’t all about hilarity. The final piece was a heart rending spot where Anna Calder-Marshall took to the stage, slumped in a chair. The director placed a basket at the side of her chair and told her to reach down and imagine taking something out of the basket. Anna chose a kitten, and as she stroked and talked to it, she became more and more distressed about who she was. She was directed to change direction, to move towards an operatic scenario, and so she sang softly about who was she, was she young or old. Suddenly someone walks towards her claiming to be her sister. She then walks back off. Anna returned to her seat and her kitten, smiling serenely at the thought that she has a sister that she could not remember. It was a very poignant ending to what was a fantastic theatrical experiment. It’s one I think worked very well, and I would love to see some more shows like this.