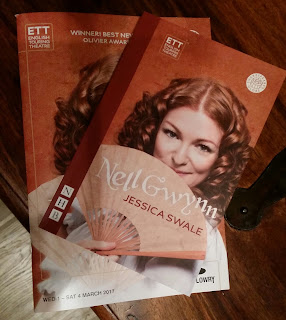 Nell Gwynn, the humble orange seller, actress and stealer of the King’s heart. A woman famed in history, but in reality very little is known of her life before she attended the court of King Charles II. No accurate records were kept of the working classes in the 17th Century; as can be seen from my recent post about The Fatal Tree, this was still the case in the 18th Century too.

So what is known of Eleanor “Nell” Gwynn? She was born in 1650 and died in 1687. Hereford, London and Oxford all lay claim to be the birthplace of Nell; tales tell that she grew up in Coal Yard Lane, a slum off Drury Lane in London. Her mother kept a brothel, and it is likely Nell worked as a prostitute until she began selling oranges in the pit at Drury Lane. Somehow she made it on the stage, and whilst she was unable to read, she made a success of becoming a popular and successful actress. Her sharp wit, and beauty caught the eye of King Charles II and she became his favourite mistress. Unlike the Kings other mistresses, Nell never involved herself with politics nor asked for a title, it seems she had truly fallen in love with the King. The feeling seemingly reciprocated in the Kings dying words “Let not poor Nellie starve.” 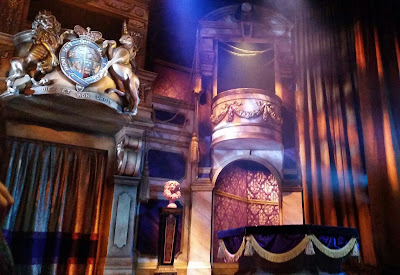 This production of Nell Gwynn does not purport to be a historically accurate portrayal of her life, nor does it tackle the serious issues of the time, instead it is a humorous and entertaining homage to the quick witted, sharp tongued Nell played with great aplomb by Laura Pitt-Pulford. Key events of her life are mapped out by a talented cast who joyously break into song and dance routines. Sitting high up on the balcony are four musicians playing instruments of the period, which give the play a sense of 17th Century England.

A special mention must be given to Esh Alladi who plays Edward Kynaston, the actor famed for playing women’s roles. Whilst Shakespeare wrote about women in his plays, actresses hadn’t been seen on the stage, their parts were played by men. Kynaston is furious at the notion of a woman being on stage, “It’s ridiculous, that’s what it is. It’ll be the death of theatre, I tell you!” No-one could ever play Desdemona as well as he could…especially a woman. What did women know about all 372 attitudes, or the 21 varieties of grief expressed by the left eyebrow? The play becomes a play within a play…the teaching of acting. It is hard to believe that such lessons go on at RADA, but it was hilarious watching Hart tutoring Nell in the art of showing terror, love, despair, and of course anger…something that apparently comes easily to women!

Nell does have a few speeches stating that plays need to feature stronger female roles, and whilst it pays lip service to the talents of women it’s only a light dusting of seriousness in a Carry-On style play that is heavily laden with innuendo. Even the harder parts of Nell’s life, trying to take on court life, the death of her mother and having to choose between King and stage are given a liberal sprinkling of party dust so that we don’t lose that upbeat mood. 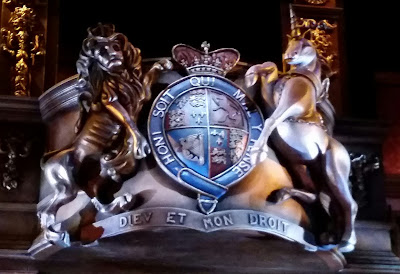 It is certainly not a play full of gravitas; it is a play full of fun showing the rags to riches story of a character that was popular with the people of her day. It charts the rise of the theatre, something King Charles II wished to popularise following Cromwell’s earlier closure of this popular public pursuit. It shows the changing attitudes to women being seen on stage. But most importantly, it gives an entertaining evening out that doesn’t require intense debate afterwards, it’s simply a play to be enjoyed!

(Whilst this play has now finished at The Lowry, it's still on tour... click below for details.)