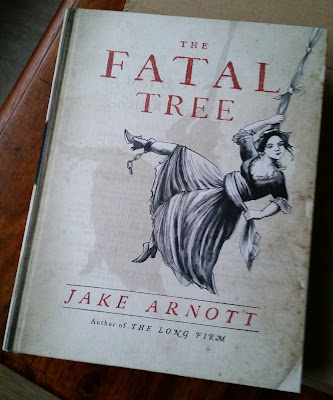 It’s not often I’ll pre-order a book, even more rarely that I’ll devote the weekend to reading it, but having read The House of Rumour a couple of years ago, I was really looking forward to Arnott’s latest offering.

The House of Rumour introduced the reader to some infamous faces of the twentieth century such as the occultist Alexander Crowley, Naval Intelligence Officer and James Bond novelist Ian Fleming and Nazi politician Rudolf Hess. Arnott cleverly weaved a tale of fiction around real life events and people, and whilst the book wasn’t perfect, and possibly a little contrived in places, I really became absorbed sifting through the fact and fiction!

History may have forgotten them, but at the time, they were the celebrities of the day.

When I realised that Arnott’s latest book was going to take me back in time to the 18th century and the thieves and whores of London I was more than a little intrigued. Whilst the book is a work of fiction, the central characters of Elizabeth Lyon, Jack Sheppard, Joseph ‘Blueskin’ Blake and Jonathan Wild are real. Whilst the exploits of legends like Dick Turpin remain in modern society, Jack Sheppard and friends have fallen by the wayside.

“Some blame the serpents, some Eve for the fall, but who planted the evil sapling that grew with the heavy fruit of its branches hanging so low and so tempting? The same cruel God who decreed His one and only Son should be strung upon a wooden gibbet.  It was He who cursed us with conscious thought.”     The Fatal Tree – Jake Arnott


An anonymous writer is compiling the story of Elizabeth Lyon from Newgate Gaol in 1726. She tells him the story of her adventures, from simple servant girl, to her arrival in London and the misfortunes that beset her for her to become the notorious thief and whore Edgworth Bess. She made the fatal error of falling in love with the first man who showed her attention, a mistake she wouldn’t make again, or so she thought.

Told in her own words, and using the street slang of the day, Bess tells the tale of how she was cast from the apparent safety of her home in the country, to falling onto the mean streets of London where she met Mother Needham. Before she could fall under the ruin of Mother Needham, she is rescued by Punk Alice and meets Jonathan Wild, the thief-taker, for the first time. Has Bess been saved, or has she just gone from the frying pan into the fire? This is not the tale of how someone escapes the ruin of the city, but how to survive through it.

“In a bad world there is little point in being good”


Most of Elizabeth’s notoriety has lasted due her involvement with the gaol breaker Jack Sheppard. His life has been written about numerous times, and in these books Bess does not come out of the tale as a likeable person. She is deemed responsible for Jack’s downward spiral into a life of crime. It was Bess who convinced him they should live together as man and wife. She convinced him to steal for her, and once he was introduced to Joseph ‘Blueskin’ Blake, the crimes became greater and more frequent leading to Jack’s arrests.


In The Fatal Tree, Bess is shown with more soul than her previous incarnations, but she is still a whore and a thief; she has not been idolised. In a world of love and betrayal, Arnott has thrown fuel onto the fire as to how an ordinary girl could fall onto hard times and end up in a life selling herself on the streets. Very little is really known about Elizabeth Lyons, most of her life is known solely through her involvement with Jack Sheppard and the scholarly texts of his life, but, for what is known of generic sex workers of the period, the tale of Bess is a well-constructed and believable one.


Oranges and Lemons say the bells of St. Clements…


As a child I never paid much attention to the lyrics. There have been many variations of the song/nursery rhyme, different churches mentioned, some added, some removed, and so it is difficult to say with certainty what the meaning of the song is. One thing is for certain, the song in all of its variations embodies a long forgotten past.  Looking into the history of the churches unlocks that past, and so does Arnott’s book in a skilfully weaved text of fact and fiction.


I have recently started visiting a pub called The Flying Horse on my various trips to London. My first encounter of the pub was through Robert Galbraith’s novel The Cuckoo’s Calling.  Her protagonist, Cormoran Strike, drinks at The Tottenham Pub (which is what The Flying Horse was known as for a period of time.) I thought it would be an interesting place to visit, and whilst I enjoyed it for its good selection of beer and gin, I was also mesmerised by its historic interior.


Behind the wooden bar is a simple notice, advising patrons of the sites past.
“The Flying Horse sits on the site of the St Giles Circus Crossroads which until the 15th Century was the location of the gallows where prisoners were kept in a large metal cage.”

It was hard to visualise this modern day busy crossroads, where people stream out of Tottenham Court Road tube station and head to the songs and starlight playing at the Dominium Theatre, as an area where public hangings took place; but that was the entertainment of the day back then. It was harder still to think that the gallows were moved and The Fatal Tree, the Tyburn gallows, was situated where Marble Arch now stands. I’ve wandered around Drury Lane and Covent Garden and now realise the secrets those streets could tell; I wonder how many shoppers on Oxford Street can say the same.


The Fatal Tree might be a work of fiction, but it allows the reader to enter a time gone by, to use imagination with a liberal sprinkling of fact. Whilst I read the book, as various characters and locations appeared, I looked them up on the internet. The past is quite fascinating. And as Jake Arnott say’s at the end of his book, if anyone else has knowledge of Elizabeth Lyon, it would be nice to know!
Book Review Home Jake Arnott london