March 23, 2017
"I get a huge kick about going to play Macbeth in North Wales in this theatre that seems in the middle of nowhere" Owen Teale

I love heading down to London to meet friends and watch theatre, but I also know that I’m incredibly lucky that I have the opportunity to see great theatre back at home in North Wales.  The renowned West End actor Owen Teale once said of Theatr Clwyd in Mold "I get a huge kick about going to play Macbeth in North Wales in this theatre that seems in the middle of nowhere and you sell out, it's extraordinary. You get 500-600 people a night, it's fantastic."

He's right, it is extraordinary. It's a 15 min drive for me to pop down the road to get my "fix" and for a theatre in the middle of nowhere, it has a fantastic programme year on year. It keeps me entertained in between visits to London and I was especially looking forward to seeing Northanger Abbey. It therefore made me nearly laugh out loud when Isabella Thorpe, a character in the play, announce that the theatre in Bath was terrible and she couldn’t wait to be back in London.  I could feel the eyes of my friend boring into me in a manner of mirth that suggested I could just as well be Isabella! (Although I have to say I've been to the theatre in Bath too, and it was a most enjoyable evening!)

That wasn’t the only similarity in the play though; the heroine of the piece, Catherine Morland, was entranced by Gothic fiction, and Jane Austen’s masterpiece set out to poke fun at what was a hugely popular genre 200 years ago. I have always enjoyed the Gothic genre, but watching this made me realise just how ridiculous it can sometimes be.

Catherine is an unworldly young lady of about 17 who lives with her parents in a small country village, and she lives her life through the pages of the romantic heros and heroines of her novels, ostensibly The Mysteries of Udolpho by Ann Radcliffe. 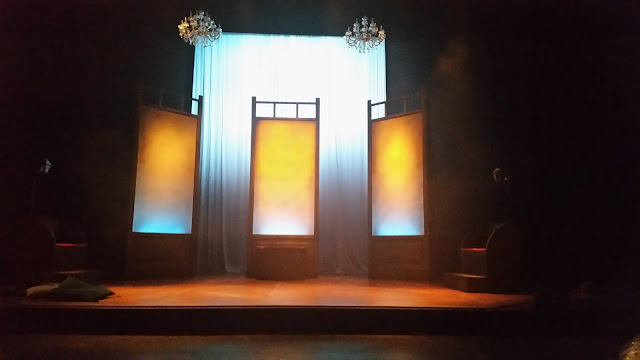 Catherine’s neighbours, Mr and Mrs Allen, take her to the city of Bath for six weeks in order for her meet and mingle in society circles. This commences the awakening of Catherine from her dream world, as she mixes with the elite in The Bath Assembly Rooms, her desperation to be with her beloved books blurs her take on life of what is fantasy and what is reality.

As in all great romantic novels, Catherine is pursued by two men, the dashing Mr Henry Tilney, and the awful brother of her new friend, John Thorpe. John is hopeful of marrying Catherine as he believes that in doing so he will inherit an enormous amount of wealth from her, Henry however has true romance in his heart. He invites her to stay at Northanger Abbey with his sister and father, and Catherine automatically becomes excited at the thought of staying in an abbey. What sinister things could be taking place at the abbey? Staying there would surely be like a storyline in The Mysteries of Udolpho!

I wasn’t sure how this novel could be transformed to the stage, but the simplistic, cleverly manufactured set, allowed the audience to enter into Catherine’s imagination. Screens allowed for the simple elegance of the dance floors of Bath to be transformed into the Gothic arches of the Abbey by basic projections. As passages were read out from Catherine's favourite book, the characters seemingly came to life around her, only for them to fade away and turn into the real people surrounding her in the Assembly Rooms in Bath.  It was an incredibly effective way of entering Catherine’s world. Whilst it was a strong cast all round, Eva Feiler as Catherine really stood out. She had such a charming innocence yet youthful exuberance. The characters from her books take over her life, in a manner not too dissimilar to many people today, who live through the soap operas that they watch on TV.

The tone of the play was lighthearted and very tongue in cheek about Gothic literature, however the play never overstepped the mark. It didn't become too contrived or stupid, it had a straightforward effective charm which made for an enjoyable evening.