Back to Prague to meet a Burketeer!

May 03, 2015
I love Prague. I first visited in June 2014 because I saw the Strahov Monastery on The Musketeers (BBC TV show!) and I had to see the ornate beauty of those rooms for myself. I went back again in September, little did I know I was about to become a Prague addict!

Having been told that the office I worked in was closing down, my immediate thought was to go to Prague, on my own, and figure out what I wanted to do with the rest of my life. The plane was booked for May, just after I finished work. Well the best laid plans and all that... things were not going well with the closure, so I was asked if I could I stay for a little bit longer? Oh well, I thought, I'll just have to take the week as a normal holiday then! Normal? I hate flying and I'm about to embark on a holiday abroad on my own. This was complete and utter madness but too late to change my mind now, so the next few posts will be all about Prague!

1st May 2014 Arrived in Prague 10 am. A dry and bright day and a trip around Staré Mêsto (Old Town) to get my bearings and relax. It does seem strange to be here on my own, still, it's an opportunity to get the camera out without someone sighing about how long I take shooting so many photo's!


I've become techno savvy in the last 12 months. I've joined Facebook and Twitter. I'm blaming Tom Burke. I don't know why, he doesn't do social media! Somehow I have ended up buying a tablet and communicating with the cyber world! Part of this cyber world is group of Tom Burke fans (Burketeers we're affectionately known as). Today I am meeting a Czech Burketeer.

I am heading to Vyšehrad a historical fort on the outskirts of town that many people don't know about.  Marie (who I'm meeting) told me to meet her at the metro. Me being me though, will not use the metro, not if it's possible to take a "little" walk through Prague! 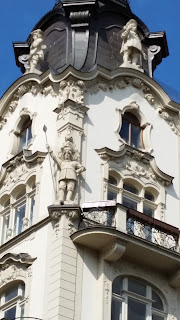 As I head down to the Old Town Square, I walk past a building which always makes me smile... well you can't be a fan of Alexander Dumas without loving the fact that Prague has a building called Three Musketeers. (tři mušketýři) 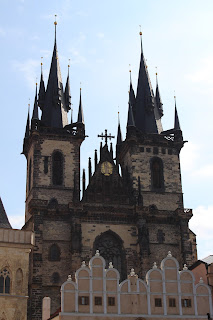 As I crossed the Old Town Square, the imposing gothic
spires of the Church of Our Lady Before Týn come into view; it's like looking at something from a Grimms fairy-tale! 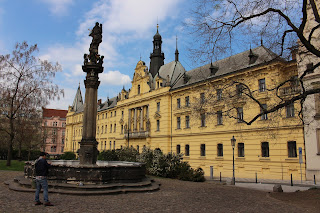 As I head out of town, I came across the beautiful Charles Square. It is quite unbelievable that such a peaceful oasis can be found within minutes of the busiest area of Prague. 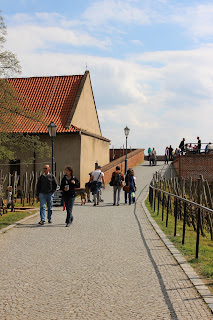 Vyšehrad is a beautiful place. There is the Basilica of St Peter and St Paul on the top of the hill, with a cemetery housing the names of a number of prolific Czech citizens including the composer Dvořák. Whilst the views looking down on the Vlatava River from there were beautiful, one place suddenly caught my eye. Hmmmm I'm sure I've seen a photo of that path before, yes I have, I'm sure Howard Charles (Porthos) posted a picture on Instagram of his fellow musketeers here!

Ice broken, the two Burketeers decided that we should have a day out at a chateau where some episodes of The Musketeers have been filmed! Well I'm not going to say no to that am I?!

Of course, there was only one way I could finish the day, and that was to pop into my favourite tea shop and have a nice pot of Dian Hong Cha! It was a blessed relief I can tell you. My friend's mother once said that even if someone chopped my feet off I could still keep on walking. Well today even I must admit I might have walked a little bit too far, and my feet were about to drop off!