May 04, 2015
Last year when I visited the city, I noticed a strange tower in the distance dominating the skyline. Neither travel partner wanted to "walk all that way", so I never go to see what it was. This time, I had no-one to say no to me, so today is the day to head off to Zizkov and Prague's tallest (and possibly ugliest) landmark!

As I head off, I suddenly realise my map does not stretch this far out of town. Well it's the tallest landmark, so how hard could it be to find? Very, when you're as navigationally challenged as me.  Every time I turned a corner the thing would disappear from view. Eventually though, it stood still and I caught up with it.

TV Tower, the landmark I tracked down, is actually quite stunning when you get close to it. It is an amazing piece of modern architecture, made even more futuristic and disturbing by the ten sculptures of crawling babies that are exploring the various parts of the tower, created by the Czech artist David Cerny.

Next to the tower lies the former Jewish Cemetery. Following WW2 the cemetery was left to deteriorate, and it became overgrown and the tombstones were destroyed. A park was built in it's place, and the TV Tower constructed. Only the oldest part of the cemetery remains and the juxtaposition of these two very different landmarks is rather haunting.

Since I was in the district, I decided to walk down the hill to Karlín where the National Monument is situated. What I should have thought about is that whilst I was climbing down one hill, I would soon need to climb another hill, complete with about a million steps to get to the top! Everywhere I go in Prague I seem to end up having to climb up so many steps, they're endless!

Well, after the end of another long day, there's only one thing for it... yes, time for a nice pot of tea!!! 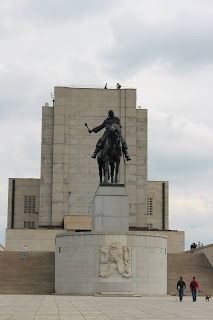 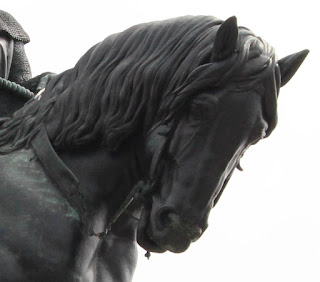