February 13, 2016
My friends were discussing the outstanding performance of the late Alan Rickman in his portrayal of Obadiah Slope in The Barchester Chronicles. I was only 9 years old when it was broadcast, so I don't remember it, although I imagine it was probably a firm favourite with my late mother! Curiosity got the better of me, and as I knew there was a copy of Barchester Towers in my bookcase, I decided it should be my second novel for the 2016 Classics Challenge. 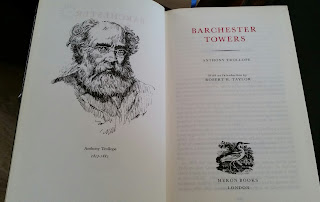 Anthony Trollope published Barchester Towers in 1857; could a novel written nearly 160 years ago still have resonance with its audience today? I must admit I was disappointed when I first started reading the book. I found it tough going if I'm honest, the characters, of which there are many, were introduced at the start, but they were valueless introductions. The start is as if you were at a party and introduced to twenty people and you can't remember who is who or what they do because you haven't had a chance to have a meaningful conversation, therefore the person hasn't registered in your mind. It also didn't help that as you ventured through the novel, each character was known by a myriad of names!


The story is very simple, A new bishop arrives in Barchester with his wife, and a new chaplain. They liven up this quiet town, showing the two sides of ecclesiastical life, the old fashioned view of the church versus new ideas. Essentially this is a book about clerical warfare interspersed with a good old-fashioned love story! Who will have the strength and courage to battle it out with some very strong and fiery characters?


Trollope's style within the novel is to ramble on. The author of the story narrates his way through the lives of the various inhabitants of Barchester. It feels like you are sitting with a grandparent who is telling you a story of the village he lives in, but he keeps going off on a tangent before coming back to the main story! The book is therefore more character driven than plot based, in fact I'm not sure there really is a plot, so far as to say there are two questions to be answered. Who will win in the warring factions of the clergy, and who will win the hand of the delightful Mrs Bold? There is very little action but it is a peak through the windows of Victorian society. It shows how the society back then was of a nicety culture, you didn't voice your opinions, you would smile and be polite and keep your thoughts to yourself.

The characters however are full of life and obviously very real to the author. He knows their innermost thoughts and desires, and by the end of the novel you also feel like you know them. Whilst their exterior character is of politeness, we get to hear what is really going on in their heads. They are schemers, social observers and there is a great insight into the psychology of the human mind.  Mr Slope is scheming and ambitious, and despite being a member of the clergy, surprisingly hypocritical! It is obvious that the writer does not like Mr Slope. He even states it in black and white "My readers will guess from what I have written that I myself do not like Mr Slope; but I am constrained to admit that he is a man of parts. He knows how to say a soft word in the proper place; he knows how to adapt his flattery to the ears of his hearers; he knows the wiles of the serpent, and he uses them." There seems to be a begrudging respect and admiration of the character he has created. The Stanhopes are unable to be part of this gentile society, they are frowned upon and hated by the clergy, again interesting as the church preaches to love thy fellow man! 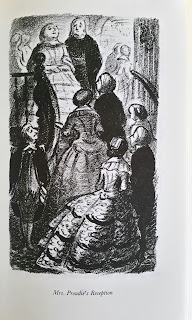 There are moments of great humour throughout the book, and it is interesting watching the plots unravel by the clergymen as they try to gain control and power. The great thing about Trollope writing in such detail is you can picture an incident with great clarity. Mrs Proudie's reception is a case in point, the comedy is almost farcical. "The sofa rushed from its moorings, and ran half way into the middle of the room...unfortunately the castor of the sofa, caught itself in her lace train, and carried away there is no saying how much of her garniture." There are also some fantastic names, both of people: Sir Lamda Mewnew, Sir Omicron Pie, Sir Nicholas Fitzwhiggan, and rectories: Crabtree Canonicorum and Stogpingum! I also laughed at the idea that to help a child whilst teething, you need to cover its teething ring in carrot juice until it dries, and then give it to the child to chew. Why carrot juice and not another fruit or vegetable I have no idea, but I was amused by the thought.

But whilst Trollope has given us some interesting characters he has this propensity to take these dull perambulations that have nothing to do with the story. He discusses good author practices and queries the differences in a writer and a photographer picturing a person or situation. These tangents are a large problem with the novel, it stops the momentum of the novel, and as a reader you can easily become distracted by what is going on around you, rather than what is happening in the pages you are reading. He even goes so far as to describe towards the end of the book how difficult it is for the writer to create an ending to a story, which rather leaves the reader somewhat perplexed and the ending feeling rushed after the slow pace of the rest of the novel. 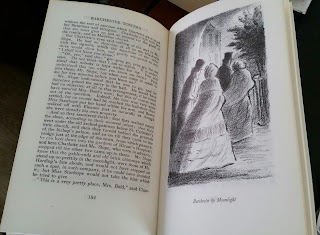 What I did find interesting is that Trollope created these strong female characters that knew their own minds, they were not the meek and mild women we often think of in classical literature, where the hero has to sweep her off her feet. "Olivia Proudie, however, was a girl of spirit; she had the blood of two peers in her veins, and, better still, she had another lover on her books; so Mr Slope sighed in vain; and the pair soon found it convenient to establish a mutual band of inveterate hatred." Mr and Mrs Proudie are an interesting couple, he is hen pecked by his strong and determined wife. Mrs Proudie was not a lady to be messed with, she was determined to get her own way, and she made certain that her husband knew it! People in the novel made assumptions about Mrs Bold and Mr Slope, however, Mrs Bold has a resolute determination to hold her head up high, keep strong, and prove everyone wrong along the way.

So does this novel still work for a modern audience?

Today we require instant gratification, we're used to things that don't take a long time, and this is definitely a slow burn novel! Essentially the novel isn't about anything much! The writer digresses a lot, which makes the story convoluted and at times difficult to follow, especially for the first 200 pages or so. At times I felt the novel was a bit of a chore to read, until about half way through the book when things started to click; suddenly I knew these characters and I wanted to know how their lives progressed. I found the chapters relating to Ullathorne rather long winded, this stopped the flow and enjoyment of the novel, but having read the book and sat back and pondered on it, I did actually enjoy large elements of it and thought it actually quite cleverly written.  The characters are often at cross purposes because everyone assumes, rather than speaking the truth, whether this be by pride or moral indignation. I think modern audiences can relate to this, and they can also relate to the curtain twitching type gossip the novel relies on.
#2016ClassicsChallenge #Box Clever Theatre Book Review Home