February 17, 2016
It is the 40th anniversary of my local theatre, Theatr Clwyd in Mold, and they are celebrating in style, starting with a wonderful adaptation of Cat on a Hot Tin Roof by Tennessee Williams.

As far as staging goes, it is very simplistic, as all of the action takes place in the bedroom of the two main characters Maggie and Brick. What is more complex about the play is the interaction of these two characters and the rest of the family who are in crisis.

The play is set in the deep south of America in the 1950's, and tells the story of one family as they gather to celebrate Big Daddies 65th birthday, and to find out if he has cancer or not.

The play opens with Maggie getting changed in her bedroom because a child has spilt something down her beautiful lace dress. She delivers a long soliloquy in a Southern drawl about her sister-in-law and her awful "no-necked monsters." She speaks incessantly, never pausing for breath as she gets everything off her chest; by contrast her husband says very little, he prefers to spend time drinking away his problems rather than talking about them.

As the play continues, we meet more of the family, and the characters delve into the past family secrets, and the future schemes that they have to ensure that Big Daddy gives his wealth to the right sibling! 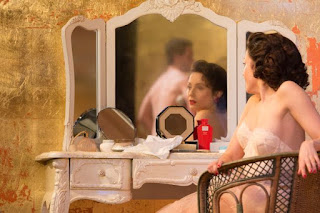 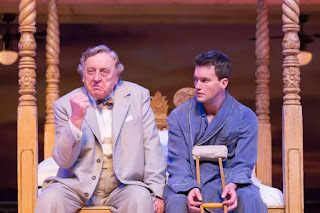 
Desmond Barrit played the role of Big Daddy, a wealthy cotton plantation owner. He has come back from the Ochsner Clinic with a clean bill of health, and he and Big Mama are in celebratory mood for his 65th birthday. The rest of the family know that he actually has cancer, and that the news has been kept from the elderly couple so that they carry on with the celebrations.

Maggie, played brilliantly by Catrin Stewart, is the plays titular Cat, she was brought up in a life of poverty and married into wealth but her life is not a happy one. The family know her husband won't sleep with her, and she has no children, so she is concerned that Big Daddy will not leave his fortune to them. Brick, her husband played by Gareth David-Lloyd, was a football hero, but now lives each day by drinking himself into oblivion. His mood is not helped by the suicide of his friend Skipper. Then there is his brother Gooper and his wife, who scheme to ensure that they will receive Big Daddies fortune.

Tennesse Williams showed that he had a great understanding of people and the complexities of the human heart in his writing. His characters are often rather tragic, and you can't help but get sucked into their stories, and you feel an empathy towards them. The interesting thing is that whilst the story was set in the 1950's in the deep South of America, the story still has a resonance with modern audiences. Families still battle and scheme, and they seek their way through life either through the bottom of a bottle, or by denial that anything is wrong hoping that all will become right. But despite the rather tragic circumstances of the individuals, and the strong themes, there were heart warming moments and it is actually rather funny and an enjoyable play to watch!

We can read a lot into the human condition by watching the characters on stage deceive themselves, and each other, so that they can survive from one day to the next. If they were honest with themselves they might feel that the future was rather bleak, but you can only deceive yourself for so long until reality kicks in and you have to face the truth. That is an important and reoccurring theme throughout the play, lies and facing death. Similar ideas surrounding the futility and nihilism of life can be found in Dylan Thomas's "Do Not Go Gently Into That Good Night", a poem he wrote to his dying father and which Tennesse Williams added as an epigraph to his play in 1974.

This was an enjoyable play to watch, and a great start to the season.