February 14, 2016
I've not been on here for a little while! I've been immersed in watching War and Peace, reading Barchester Towers, and I was commissioned to do a get well card for Howard Charles who plays Porthos in the TV drama The Musketeers, who it appears has been in a rather nasty traffic accident.

I must admit to rushing out and buy the War and Peace DVD, and I have to be honest, I'm sort of feeling guilty about my previous posts about the show. Having watched it all in one go, I'm wishing my earlier comments had been a little more accepting of the drama for what it was...an outstanding and exquisite piece of TV entertainment. I think a lot of the actors grew into their roles as the series progressed, whilst some seemed immediately comfortable with their roles! I still think it's a shame that Andrew Davies made the decision to cut so many scenes. I think 8 or 10 episodes would have been much better. Maybe I'm just greedy, but when you have a lavish drama such as this, and a wonderful text to work with, you can afford ten episodes, it's not as if you are trying to think of material to fill the time with! On the DVD their is a cut scene showing the full scenario of Nikolai losing at cards, and it was such a shame it wasn't kept...it showed him win the very final hand, and just how cunning and devious Dolkhov had been though out their entire game!

Speaking of Dolokhov, I'm glad that there was a quick view of him at Ilya's funeral. I had a bone to pick with Tolstoy; he appeared to forget to give both Dolokhov and Denisov an ending. Poor Dolokhov was last seen in the book flicking his whip and being rude to the French. At least the TV show made us aware he survived to the bitter end (as you've probably gathered I had a soft spot for Dolokhov in both the book and the TV series!) Maybe we should have a spin off series, what Dolokhov and Denisov did next! 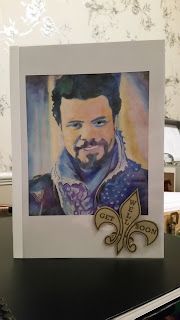 I'm not a professional artist, so it was a thrill to be entrusted with what I considered an important job. There is a Musketeer Fan Club on Facebook, apparently I'm a member, I just didn't know it! (Someone must have added me to the group rather than me requesting an invite, I'm sure I'd remember doing that!) Anyway I digress, it seems Howard Charles (Porthos) had been involved in an accident, they wanted to send him a Get Well Soon hamper and they needed someone to do his card. One of my fellow Burketeers kindly put me up for the job. It's not something I would have put myself forward to do, I am so rubbish at self promotion, always have been! Even when I worked I never volunteered for stuff because I thought I'd be rubbish...then people would volunteer me and I'd do an amazing job (I know because that's what people said!)

I was a bit scared about doing Howard's card, there are so many talented people out there and not many people on the site know me. I said I would do the card and I did a watercolour of Porthos on the front, and on the inside I did a transparency of the "All for One" handshake with the names of the donor's on. I was then told there was no verse to go inside the card...so I did that too! Hopefully Howard won't be too offended by the fact that I am obviously no poet...he may be so amused it may actually assist his recovery!

Barchester Towers took me nearly two weeks to read, which surprised me because the book didn't seem that long, only 500 or so pages, but it was a bit of hard work as the author tends to ramble a lot...a bit like me really, so I feel I should have enjoyed it more than I did. (I have done a separate review post, as it is part of my challenge in aid of Box Clever Theatre Co)

So what else has happened since I last checked in? Hmm yes, Hampstead Theatre posted a tweet of the cast of the upcoming show Reasons to be Happy by Neil LaBute. The actors were headless, but from the photo I am 99% certain that Tom Burke is reprising his role of Greg from the prequel Reasons to be Pretty. The way he sits, the fact that his shoes are the same as the ones he wore at a waistcoat fitting, and the pair of glasses and mug of tea near the photographer all scream Tom! So I have bought my tickets to the play and will look a complete fool if my detective skills show that I am no Sherlock Holmes! (And now I've read the play I am adding it to my TB plays post...so he had better be in it!)
Home Tom Burke