February 17, 2016
I really enjoyed reading the play Reasons to be Pretty (RTBP), and I was so disappointed that I hadn't been able to see it on stage...I'm sure I would have loved it! 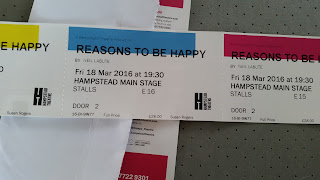 Reasons to be Happy continues the story of Greg, Carly, Steph and Kent three years own from when we left them. I have my tickets already, and I am thrilled that I will be able to see how their stories develop on both paper and on stage!

When I read the play the first thing that I noticed is the beautiful symmetry in which both plays start. Three years down the line, Steph has married Tim, and she's still arguing (well screaming) at poor Greg, and Greg, as usual doesn't think he's done anything wrong! He's just taking it in his stride, despite the murder of his ice-cream sandwiches!

I can't say that I like Steph very much in the first play, and my attitude has not changed too much, although I may have mellowed a little bit towards her. Sometimes I find that she is unnecessarily mean. She has anger issues, and is very much like Kent. She lashes out at Greg, but Greg really loves Steph despite how dreadful she is to him. She is two faced and almost psychotic in the way she publicly humiliates him by screaming at him. In RTBP he didn't want her to leave, it was her choice. In RTBH he really seems to want her back, but only after he has sorted himself out and his problems; he stands up for her and won't let Kent say anything against her. 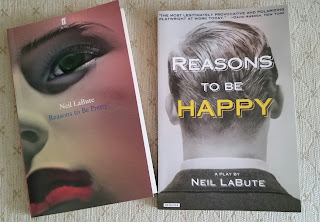 Greg wants to be liked, he doesn't like confrontation, yet he has an innate ability to push the right button to create hostility. He often doesn't think before speaking and this leads him to become embroiled in finding out how the female mind works! He is not honest with people, and often not with himself either. He seems to want to please others rather than himself, and worries more about their feelings rather than his, so he is often evasive with people. He is so mixed up emotionally that he thinks starting a relationship with his ex-girlfriends best friend, who is also his former best friends wife, wouldn't lead to any problems...although the fact that he didn't want to tell them suggests he knew all would not go well! Essentially both Greg and Carly are just two lonely souls hoping for the best and this play makes them look at themselves and what they really want and need from life.

Kent is egotistical, obsessed with looks (his comments about Carly needing to go to the gym straight after giving birth in RTBP showed that he had no depth to his soul.) He is very hot headed, lashing out with his fists rather than thinking things thorough, yet surprisingly he is the one person perceptive enough to tell Greg what is wrong, that he needs to lift his head from the pages of his books and do something constructive with his life, (like Kent does with the kids football team.)

I think the scariest thing about reading this play is the similarities I have with Greg, in his final "speech" it was like someone has been following me around and written about me. "I wanna fix me and be happy...but I don't even know what that word means anymore!... I can't keep reading books and, and listening to my old mix tapes and hoping for the best, figuring life will sort itself out if I just give it enough time."

Twenty years in a corporate rat race has made me completely forget who I am, what actually makes me happy, but one thing is for sure, these lines made me laugh...

Kent: "Another week or two and I'll expect to hear you're on Twitter...
Greg: "Ha! No chance, man...I'm gonna have to draw the line somewhere!"

Yes, I can't give up the reading, or the music of the 80's, but maybe a little less time on Twitter, and a bit more time being productive is certainly a lesson that I can learn from Greg and Kent!
Book Review Home Neil La Bute Tom Burke