February 25, 2016
I've read my "Classic Challenge" book for February, but having found out Tom Burke has recorded The Magus for BBC Radio 4 with Charles Dance, I decided I had to read it! I really should tip my hat to Tom, he's encouraged me to read far more diverse literature than my university professors ever did (and what's more he doesn't even know it!)

The Magus is a strange novel and certainly not everyone's cup of tea. I think it is one of those love or hate novels, and I loved it. It was a bit like Lord of the Flies meets the TV programme Lost, where events create moral and emotional reactions, and most of the time you don't have any idea what is really going on! The novel takes us through the journey of Nicholas Urfe (a play on the word Earth) through the labyrinth of his soul.  He is bored with his life, and he goes on a thrilling, erotic journey of suspense and confusion. In places it is like reading a ghost or horror story, sending shivers down your spine as you recoil at what is happening to Urfe, but in other places it leaves you dazed, confused, and wrestling with your mind as to who or what is real and what is fake.

Trust nothing, trust nobody...not even yourself!

Urfe initially takes us back to his childhood. He explains how he felt that his parents dying in a plane crash opened up the possibilities of his life; he had felt so trapped whilst they were alive. He feels a token gratitude to them, but he never really liked them because they didn't understand the world he belonged to; but as we follow Urfe's story, it's obvious that he doesn't really understand the world he belongs to either. 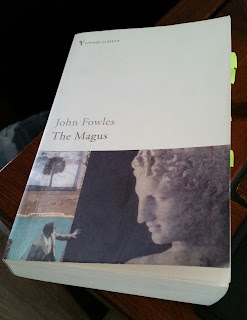 He meets Alice, an Australian, who has her own difficulties in life, but she submits herself to him. She falls in love with Urfe, however, he doesn't see the depth of feeling, and certainly doesn't reciprocate it. He sees her as someone he has had sex with it, and now he is leaving England to take on a job in Greece. He doesn't care what Alice does with her life...but they will stay in touch.

Part of the human psyche deludes us into believing that if we run away from our problems our lives will magically get better, our problems will go away...but this isn't true, our problems follow us, and they follow Urfe in a way that is so unimaginable. But Urfe takes a job on a remote island in Greece and leaves Alice and his old lifestyle behind. When you travel on your own and you get off the plane in a new land there is a myriad of emotions. There is excitement about what lies ahead, tinged with some loneliness because you don't know anybody. You feel a bit like Alice in Wonderland, expectantly disorientated, but hoping that the people you meet will put you on the right path to happiness.

Urfe meets Maurice Conchis (conscious?!) a wealthy Greek billionaire, who befriends him. From the beginning of the meeting, it is obvious that this is not going to be the simple story of Nicholas Urfe finding himself. Instead the book shows that by clever manipulation, certain designed incidents can deceive all of the human senses. From the first time we enter Conchis's house we are introduced to blatant sexual references and erotica at the "waiting room." There is a clock of a naked cupid where the second hand represented his penis, and Satyrs, the phallic male companions of the Greek God Dionysus are seen, both as statues and "real" life forms. As the novel progresses, it is little wonder a God attached to ritual madness and theatre was introduced so early on.

Conchis becomes an amazing conjurer of mind-games. He stretches credulity throughout the novel, so much so that you don't know who to trust, who speaks the truth. The scary thing about this is that it is not so far fetched from the real world. We are often open to suggestion, we like to think that we won't be taken in by someone, we are not naive, but can we really tell fact from fiction? If you have a social media friend for example, they can tell you anything about themselves, good or bad, and you are likely to believe it; especially if they are capable of keeping their deception ongoing. This might seem unlikely, but it happens, and unless you meet the person for yourself, who can tell what is real, and what is a fantasy?

The book has many thought provoking comments. There is a nihilistic approach to human life throughout, the human race is somewhat unimportant therefore does it really matter how we treat one another? The human condition can mean that we find it easier to lie than to tell the truth for fear of hurting someone..."those grey, searching, always candid eyes, by their begging me not to lie, made me lie.  'I like you. Really very much'."But that same condition can also give us the desire to hurt someone in order to save our own feelings, "I lost my temper. I dragged up everything I could remember that might hurt her." We are a weak race who find it easier to communicate via a letter than to actually talk face to face with someone "Read it." I don't want to live anymore. I spend most of my life not wanting to live...I can't remember having been happy for two or three years...All I can remember is forcing myself sometimes to look happy...I might kid myself for a moment that I am happy. The human nature is a strange beast we prefer to hurt than to be honest. "If anything might hurt her, silence would; and I wanted to hurt her."

It is interesting to note, that one of the first things to lure Urfe towards Conchis was a few lines from T S Eliot's poem, Little Gidding. This poem discusses time, perspective, humanity and salvation. A ghost delivers a sermon to the poet, advising what a burdon wisdom can be, being ashamed of past deeds, the awareness of being foolish, and a perception of what real beauty is. In the book, the world suddenly becomes one theatrical stage. Urfe is compelled to stay on the island, to keep questioning what is going on, and why, and he can't leave, because of the power that Conchis has over him. Throughout the entire novel, Conchis designs these staged events to discipline and punish Urfe, and without knowing it, Urfe is also facing the confliction of venality versus venery. The island almost becomes a prison, Urfe can not do anything without being seen, every letter written, every intimate act, is all seen be Conchis, the ultimate in panopticism.

The book is dotted throughout with references to Greek mythology, ritual initiations, Tarot cards and above the Illuminati, the all seeing eye who knows every move that Urfe makes. This Illuminati we discover are men and women of science, not just tricksters. Everything that happens to Urfe is designed for a specific purpose, so once he has arrived in their circle, he can not escape, they have conjured precise events to get him to the island in the first instance, and they will continue to dominate his life until they agree to let him go from their psychological game.

There is no right reaction to the book, although I believe that the book is worth reading. It's a personal reaction to the surreal events in which Urfe finds himself; you may find them ridiculous or you may find some resonance with what is happening. I also love the fact that there is no right or wrong ending...it is left open and up to the reader to decide what type of "happy" ending you want it to have. In most books I read I want to know the ending, but I think in this particular book it is right to leave things open. The author has written a book of the unexpected. You don't know what the turn of the next page will bring, and therefore it is only right that he leaves the last word to his reader.
Book Review Home John Fowles Tom Burke