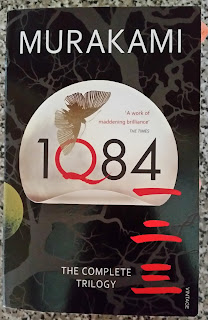 I am a HUGE fan of Haruki Murakami, and this lumbering great tome has been sat on my bookshelf for a while waiting for the right moment for me to give it the justice its 1318 pages deserve.

Tengo shunned his child prodigy abilities and became a part time maths teacher. He embarked on a career in literature, and became the ghost writer of a teenagers story, "Air Chrysalis." The publisher of a literary company thought the story had the potential to win a prestigious literary competition, but the writing was flawed, if Tengo re-wrote the tale it could be entered into the competition. The teenager Fuka-Eri who wrote the story is a strange character, almost ethereal. She has no grasp of social convention, but her story is one which will create strange undercurrents to surface in the world of 1984.

The character Aomame is complex, she is more than just a sports instructor. She is a hired assassin to the strange Dowager, an elderly lady who has set up  a commune for victims of domestic abuse and who seeks her own type of justice in the world. And what kind of world is it? It is one where two cults show the darker side of the world. The Society of Witnesses, a Christian type sect, where its members refuse life saving surgery and knock door to door handing out pamphlets. A close knit community where if you do not follow the rules you are no longer welcome, you no longer exist in their society. Then there is Sakigake, a cult group with a mysterious "leader", of whom we hear disturbingly nasty stories about. Sakigake was innovative, they switched to organic farming which they could sell to affluent urbanites who would be happy to pay high prices for vegetables free from contamination, a highly cohesive group who are obsessed with secrecy. This secrecy is set to be undermined once Air Chrysalis is published and the darker side of the commune is about to be exposed.

"A man who finds joy in raping prepubescent girls, a powerfully built gay bodyguard, people who choose death over transfusion, a woman who kills herself with sleeping pills while six months pregnant, a woman who kills problematic men with a needle thrust to the back of the neck, men who hate women, women who hate men: how could it possibly profit the genes to have such people existing in this world?"

But what world are we living in? Aomame is living in 1984, and takes a seemingly normal taxi ride to a job. The taxi gets stuck in traffic, and whilst she sits listening to Janacek's Sinfonietta, her taxi driver warns her "Things are not what they seem." About to miss her appointment, Aomame is told to leave the taxi and take the emergency exit from the highway. Aomame climbs down a ladder and without realising it, suddenly finds herself in a world that looks just like 1984, but there are subtle differences, there are now two moons in the sky, and Aomame begins to realise that she has entered an alternate world. Those of us familiar with Murakami know that he writes about parallel dimensions which his characters subtlety slip through. Everyday occurrences suddenly transport them into another realm. Normally a man is searching for a woman he has lost (Wind Up Bird Chronicle), but in 1Q84, a mutual search is underway...a boy needs to find a girl, and a girl needs to find a boy.


Q is for "question mark"

"1Q84 - that's what I'll call this new world...Q is for "question mark". A world that bears a question." It is no surprise that there are elements of George Orwell's 1984 in this book. The dictator Big Brother is similar to Leader, but Big Brother has become too obvious, so now the Little People are who we need to look out for. It is not just George Orwell that Murakami steers us towards, Chekov, Dstoevsky, Lewis Carroll, Kubrick, Proust, Kafka, Macbeth, even Frazer's The Golden Bough is cited for us to read and learn from. There is also a reminiscence of Lovecraft's writing. "Some numbness remained, but the hand was certainly his. So, too, was the smell of sweat emanating from him, an oddly harsh odour like a zoo animal's." Murakami is a writer to elicit the best from all of your senses, you don't just read him, you can smell him, not literally, but the way he describes food cooking in such detail you can smell it cooking, and then taste it and savour all of its complex flavours. And it is this complexity that drives you onto reading the book, because essentially the story is very simple. It is a love story. A boy and girl were at school together and had a short mutual attraction, which despite spending years apart has played on their minds, and now they need one another, and events will lead them to start looking for each other, events that can happen in 1Q84, but not in 1984. The characters, as always, find themselves in a complicated maze that they need to figure out. Is this some kind of metaphor for the reader who struggles through the maze of day to day realities of life?

Whilst the novel is set in a fictitious world, the characters are very real. I like this about Murakami novels. The characters stay true, whilst the world around them becomes fake, but how like our real world is this? We sit everyday watching a fake world go by, never questioning, just accepting what we see in the news, what we hear politicians tell us, believing that a government would never lie to its people. We then find out that wars and atrocities have been committed under the cover of lies, that the politician have been deceiving us. Is our world really any more abstract than the world of Murakami's? And if this is true where does the problem lie? The only people that can change these things are us, but how many of us are too scared to do or say something? This is where we watch the bravery of the characters who have a goal, and will do anything to achieve that goal, and somehow we wish we could be just a little bit like them. This is where fiction and reality trade places again.

Good and bad are also tradeable entities, they continually switch places, there is never absolute good and absolute evil in the world, and we see this through the eyes of Murakami. A gentle and loving husband can seem like that to all of society, but to his wife he can be seen as a monster. She is the one that takes a beating and has to cover up the bruises, and this can be taken to any level. We let people see what we want them to see, we don't tell everyone the truth of what lies behind that closed door. "Our man did this," the dowager said. We've taken care of her three fractures, but one ear is exhibiting symptoms of hearing loss and may never be the same again." ... "We can't let anyone get away with doing this. We simply can't." But should we take the law into our own hands? Can we trust the world to help us out if we don't help ourselves out instead? In this strange world filled with maza's, dohta's and air chrysalis's the man may have raped a shadow, not a real entity, does this make his crime any better or any worse?

Once you have entered the world of Murakami it is difficult to leave. Once you find yourself transfixed by his writing you want more and more of the madness, you don't realise until it's too late that you've been sucked into the rabbit hole and there is no escape. Throughout the book we meet interesting people, we do not read the whole book through the eyes of Tengo and Aomame. The side character of Ushikawa is interesting and at times sad. The strange story of the NHK collector knocking on doors is an interesting side story, and it wouldn't be Murakami if cats did not feature somewhere! In this book we hear of the fable about the "Town of Cats". It is a story Edgar Allen Poe would be proud of and a place I certainly would not want to visit. Murakami's cats are not the soft cuddly variety! But all of the stories that seem incomprehensible on their own, when added together they start to make some sort of sense, but only if you try to look into the deeper meaning of things. I think many people disregard Murakami's writing because on the surface it seems trite and nonsensical, but take the time to try and understand him and his work will start to pay dividends. The world as you see it starts to change as you read, things you see as implausible suddenly seem to start making sense. That is what is clever about these types of novels, Murakami takes a plausible event, and twists it into something that could never happen, but it is not as far removed from reality as a science fiction story would be.

"It's very difficult to logically explain the illogical."

The book is a challenging read, it is after all 1318 pages long, and if I am honest, it could be shorter. We can't forget that this was written as three volumes, so perhaps in publishing it as one volume, cuts could have been made. Murakami has a repetitive streak, and there are lots of times that he has repeated concepts and the retelling of the story that the reader does not need. This slows the pace of the novel down, but I don't mind that. I like the Japanese sedate way of life that seems to slowly flow through the book. Nothing is rushed, and that is why I like reading, it is a chance to sit and relax and not rush.

I think for many readers, the fact that Murakami goes off on detailed tangents can be annoying, and maybe they are best sticking to his shorter quirkier novels. The narrative has been stretched out over the three books, but I like that. I want to feel that Tengo and Aomame's journey has taken the nine months of the book to progress through, I don't want to feel like the journey has been an easy one for either of them, it would detract from the point of the story, that they needed to search for each other.

I therefore recommend this book to Murakami fans, and those who want to take on the challenge of an alternate reality. It is a long book, and I prefer some of his other shorter novels, but I do think that this epic novel will remain a firm classic with readers of this genre.