We know 16 of Shakespeare's plays were printed and published during his lifetime, even though many of them were published without the consent of the author. It is understood many were obtained surreptitiously from the playhouse! The remaining 21 plays remained as manuscripts until 1622 when Othello was published. In 1623, two actors who were friends of Shakespeare, collated all of the dramas, both published and unpublished, which they knew to have been written by Shakespeare. 36 plays were comprised in this collected works...the final play Pericles was added to the collection in 1664. It is these 37 plays that The Globe celebrated on the weekend of 23rd and 24th April 2016. 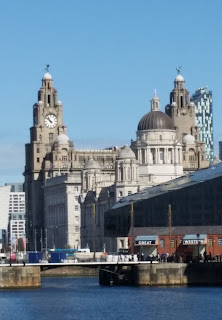 37 ten minute films were commissioned, and 37 screens erected along a 2.5 mile stretch alongside the river Thames, from Westminster to Tower Bridge. Liverpool was the only other UK city to show these 37 films.  Various reports from London advised that many screens were not working, or various other glitches, but it seemed most people enjoyed themselves as they were immersed in this unique experience.

37 plays at 10 mins a play is 6 hours and ten minutes of your life, and that is not taking into account walking from screen to screen, waiting for the start of the play, or experiencing glitches! It would need either very good stamina, or a break and be done over two days to watch every film. In Liverpool, the screens were spread throughout the city...there was no way every film would be watched, so choices needed to be made!


I HAVE to watch Henry VI part III.

I went to Liverpool with my friend, a huge Shakespeare fan. I admitted there was one play I wanted to watch...and if she didn't mind, I'd like to see it more than once! I don't know what it is about my non Tom Burke fan friends...they really don't seem to mind me dragging them around to see him. 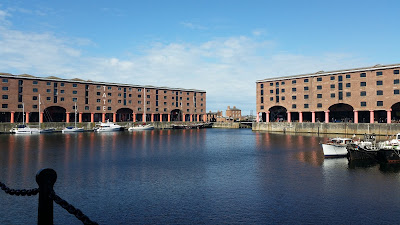 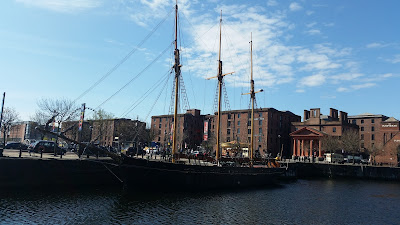 In the order of fairness, I suggested that we watched the films around The Albert Dock, then saunter up to the Anglican cathedral for a bit of Hamlet, and then wend our way to the Everyman Theatre where Tom Burke and his father, David, were playing a father and son in Henry VI pt III.

Map in hand, we headed to The Beatles Experience. There were no signs advertising The Complete Walk, so we asked and were redirected to their cafe to watch The Merry Wives of Windsor. The cafe was empty so we could sit right in front of the screen. I laughed when the line "let the sky rain potatoes" was said. I still can't get that interview out of my head where Tom remarked regarding The Musketeers diet, no-one had ever said to him "do you really need that potato?"

Timon of Athens, A Midsummer Night's Dream, Macbeth and Henry III followed. I had mixed emotions about it. Some venues were fine to watch the films, especially as it was quiet when we went to view them, but others... one was in a bar on an Ipad, and at the Tate Gallery we had to ask for the volume to be turned up because it was set up in the entrance foyer where there was a heavy and noisy footfall. 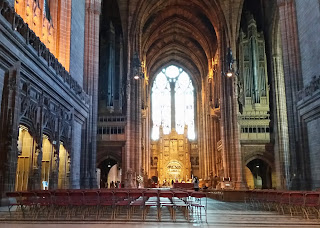 The walk to the cathedral was a long affair, as many pathways had been blocked off for building work, but eventually we arrived and we were escorted up to a viewing room to watch Hamlet. It was perfect, I just wished all of the venues had been this good, and so well organised. 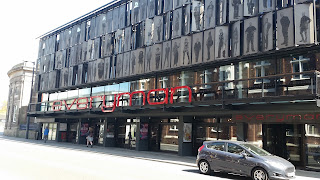 A couple more plays and suddenly we are at The Everyman Theatre. They were playing all three films on a loop together, so we would only be able to see Tom's part every half hour. We walked into the theatre, and as we walked through the door, so did Tom onto the screen. I did my very best not to squeal and just stood there mouth wide open. All three actors in the piece were brilliant, David Burke especially so. When the film finished we went and took a seat and watched all three parts from start to finish.

Afterwards, as much as I wanted to stay, I suggested we went to the Philharmonic Dining Room for lunch. We ordered our food and calculated when Tom would be on again. As we were finishing our food I looked at the clock and said "oh, Tom'll be on in 4 mins". My wonderful friend just looked at me and said, "well I've finished so you'd better hurry up then". I stuffed the remains of a burger into my mouth, grabbed my coat and bag and the pair of us ran up the road, through the front door of the theatre and nearly broke our necks as we ran up the stairs to where the film was being played. Almost choking on undigested food, we quietly walked in...and a second later Tom appeared on screen! The things his fans do. He'd shake his head in disbelief I'm sure! We then noted that Henry IV Pts I and II were being shown at a small theatre around the corner, so we went to watch them. 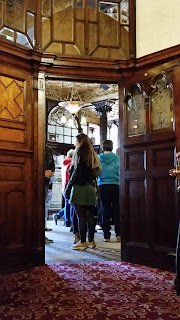 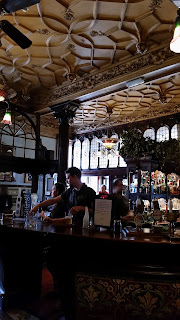 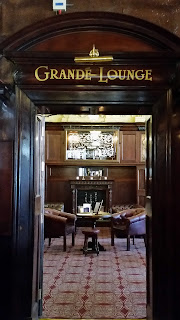 As we came out afterwards I got a message from a friend who had come down from Scotland to watch Tom. I said I would meet her at the Everyman. I walked in and spoke to a member of staff who said that the final run of the film had started about 20 mins earlier. Hmmm does that mean part III is about to start? Yes she said...I ran back upstairs and managed to watch the play again for the 4th time! As I entered the theatre, I noticed not only was my friend from Scotland there, but also another friend who I had met through being a Tom Burke fan! We hugged and went downstairs for a cuppa, and we reflected on Tom and David's performances. We were all impressed, and my friend said she could see why we thought they were both such great actors. They both brought depth and emotion to the roles they were playing, and we wondered just how much strain it was for a real father and son to play those particular parts.

After saying our goodbyes we headed off to watch Henry V before getting the train home. Sadly when we arrived the film was being unplugged. I had to show the venue that the film was being shown on both days, until 9pm, and that it was currently only 6pm. The film was put back on for me, but it underlined just how disorganised this event had been, and how badly it had been thought out in Liverpool. It was an enjoyable day out for me, I only live across the river Mersey, but those people who travelled long distances to watch the films had my sympathy. If I had made a long journey to watch a film in the corner of a cafe on an I-pad, I'd have been rather disgruntled! As it was, there was just enough time to grab a tea and cake "take-out" to eat on the train home. (I'm just so rock n' roll!)